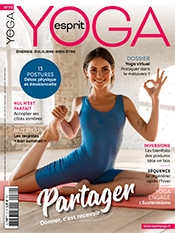 Created in March 2011, the magazine Esprit Yoga is the first periodical publication of yoga to appear in newsstands and in press houses in France. Bi-monthly 100 pages, Esprit Yoga tackles with rigor and in depth all the subjects related to yoga, considered as a practice, certainly, but also as a system of values ​​and as a lifestyle. In each issue are therefore presented several postural sequences, but also subjects of spirituality, history of yoga, yogotherapy, society, nutrition, ecology, discovery and everything related to the news of yoga in France is in the world. Esprit Yoga is the only French yoga magazine whose content, including postural sequences, is entirely designed, produced and produced in France.